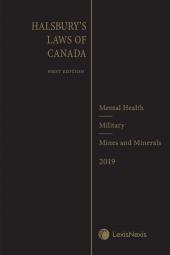 Society's growing recognition of mental health issues is an important development for Canadian lawyers, who are increasingly called upon to advise clients on the implications of those issues, including questions of capacity, consent, and guardianship. Contributed by several of Canada's leading authorities in this area of the law, Halsbury's Mental Health (2019 Reissue) title provides a truly national explanation of Canada's civil mental health system, and is an ideal reference for every lawyer seeking a clear and accessible understanding of its legislative and judicial underpinnings.

With Canada's armed forces at their most active level since the Korean War, this valuable title is a timely and comprehensive summary of the law that governs military operations and military personnel. From a concise discussion of the organization of the Forces to issues of deployment, human resource management and military justice, the Halsbury’s Military (2019 Reissue) title is carefully designed to serve as the definitive first reference for anyone researching this specialized subject.

Mining is one of Canada's most important economic sectors, contributing over $32 billion to the gross domestic product (GDP), employing over 300,000 workers and accounting for 19% of Canadian goods exports. Halsbury's Mines and Minerals (2019 Reissue) title elegantly and succinctly summarizes the law governing mineral rights and mining operations in Canada for anyone seeking a basic grounding in the area.

The Office of the Judge Advocate General for the Canadian Forces