The Law of Charitable and Casino Gaming, 2nd Edition

The only comprehensive resource on gaming legislation and jurisprudence in Canada, with insightful analysis and commentary on the Criminal Code, charitable gaming, government gaming and horse racing. The focus throughout is on regulatory compliance.
Par Donald J. Bourgeois (Auteur) , Susan B. Campbell (Auteur)
Éditeur: LexisNexis Canada
Langue De Publication: English 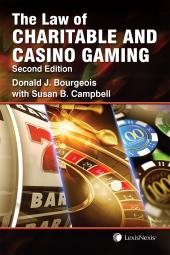 Must-have for anyone in the casino gaming industry<
This one-of-a-kind book provides vital information and insightful analysis and discussion of case law and interpretation of statutes relating to casinos and gaming in Canada. Written by an industry expert with more than 25 years of experience in the gaming sector, the text  reviews what is legal (and what is not) with a focus on understanding the federal and provincial regulatory regimes and compliance with those regimes.

New in this edition

A great resource for:

Donald J. Bourgeois, B.A. (Hons.), LL.B., is is a lawyer in Ontario who practises primarily gaming law, regulatory law, and charitable and not-for-profit law, including as counsel to Fogler, Rubinoff LLP. Mr. Bourgeois was General Counsel for the Alcohol and Gaming Commission of Ontario for almost a decade, during which time he also served as Deputy Registrar, Director of Licensing and Registration, and Director of Legal Services. Previously, Mr. Bourgeois had been counsel for the Ontario Racing Commission and had also been its Executive Director. He has been legal counsel for several campaigns at the municipal, provincial and federal levels.

Mr. Bourgeois has extensive experience in public policy and public law, including in the development of public policy, the drafting of legislation and regulations, the implementation of public policy and programs, and enforcement of the law, including through litigation. He is the author of Public Law in Canada, The Law of Charitable and Casino Gaming and several texts for the charitable and not-for-profit sector, including The Law of Charitable and Not-for-Profit Organizations, Halsbury’s Laws of Canada’s title on Charities, Associations and Not-for-Profit Organizations, Charities and Not-for-Profit Administration and Governance Handbook, and Charities and Not-for-Profit Fundraising Handbook. He is also Adjunct Professor at York University’s Master of Financial Accountability. In recognition of his contributions to his community and profession, Mr. Bourgeois is the recipient of several honours and awards, including The Queen Elizabeth II Diamond Jubilee Medal, AMS/John Hodgson Award, The Amethyst Award, Kitchener-Waterloo Arts Award, and the Canadian Gaming Association’s Industry Leadership and Outstanding Contribution.