This book authoritatively articulates the governing principles of criminal law, and features a clear and comprehensive analysis of every offense in the Criminal Code and the Controlled Drugs and Substances Act. This is a student edition. 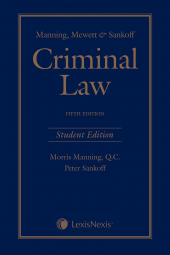 Canada's premier treatise on criminal law has been thoroughly revised and updated once again. Written by defence counsel Morris Manning, Q.C. and Professor Peter Sankoff, Manning, Mewett & Sankoff – Criminal Law, 5th Edition, Student Edition (softcover version) provides an updated, detailed and critical examination of the criminal law of Canada, from the governing principles of criminal law, to a clear and comprehensive analysis of important offences in the Criminal Code and the Controlled Drugs and Substances Act as well as defences.