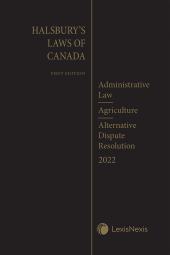 Halsbury's Administrative Law (2022 Reissue) provides a straightforward and accessible discussion of the rules that govern the activities of administrative agencies of government in Canada. Examining the body of general principles that shape the exercise of powers by public authorities, this clear narrative is an ideal general reference for lawyers and jurists or academics seeking a basic statement of the law in this important area. Topics covered include:

The law that regulates agriculture is drawn together from several "black letter" areas of private law (including the law of contracts, torts and property) and public law (including criminal law, regulatory law, administrative law and constitutional law). Activities relating to agriculture are affected not only by the regulatory effects of federal and provincial legislation directly targeting the sector, but also by a large body of law of general application that affects producers, processors and distributors of agricultural products.

Halsbury's Agriculture (2022 Reissue) discusses the many aspects of private and public law that regulate how farming is carried out in Canada, including: