The Encyclopedic Dictionary of Canadian Law

From the very first entry (“A or a”) to the last (“ZZZZ”), it is clear that this new publication is the most comprehensive Canadian legal dictionary available. It is a thoroughly contemporary, truly essential resource that even includes definitions of common acronyms now used in text slang – a useful addition given the extent to which text messages are now used as evidence in criminal proceedings.
by Kevin P. McGuinness (Author)
Publisher: LexisNexis Canada
Publication Language: English 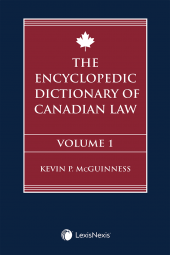 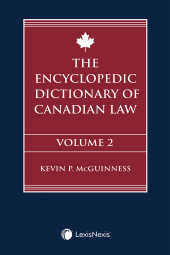 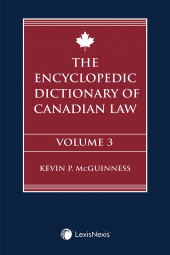 Having access to a reliable dictionary of legal terms is invaluable to lawyers, legal academics, judges and law students alike. The Encyclopedic Dictionary of Canadian Law fits the bill perfectly. This work provides the legal profession in Canada (and all others concerned with the law) with a concise yet comprehensive and definitive dictionary of the Canadian legal lexicon. It is written in language that is fully accessible to law students and the general public, even though the content is still authoritative for practitioners, legal academics and the bench.

Useful Content, From A To Z
Although heavily influenced by the American and British terminology from which it is derived, Canadian legal terminology differs from them both in several important respects. Many of these differences are fundamental and arise from the constitutions of the individual countries. For instance, in the United Kingdom, there is neither a written constitution nor an entrenched charter of rights. Despite the devolution of limited legislative authority to subordinate assemblies in Northern Ireland, Scotland and Wales, the constitution of the United Kingdom remains unitary. There are also important constitutional differences between Canada and the United States, such as in relation to the separation of powers, the distribution of powers between the federal government and provincial/state governments, and the rights accorded constitutional protection. This text takes all these differences into account. The result is a uniquely Canadian product – a vital distinguishing feature from other dictionaries on the market.

While focused on the laws of the common law provinces, this work is national in scope, as it includes definitions for hundreds of Quebec civil law terms. The dictionary is also unique in its approach. Although there have been a number of Canadian law dictionaries in the past, many have focused on the definitions given to legal terms in statutes or other legislation and have paid little attention to the manner in which terminology has been interpreted by the courts. By contrast, the more than 65,000 main entry definitions provided in this text are taken predominantly from both Canadian case and statute law, focusing in particular on statutes either of broad application or those statutes that exhaustively define a specific term for the law of Canada or a province. However, the work also includes important terms from academic disciplines (e.g. economics, sociology and political science), professions (e.g. accounting and medicine) and the business world that are of relevance to legal practice, research and study.

The Encyclopedic Dictionary of Canadian Law will be a vital tool for all legal professionals. Civil litigators can rely on it when drafting factums while contract lawyers will find it helpful for preparing contracts and legal opinions. In addition, it will assist the judiciary and members of administrative tribunals when choosing and defining specific terms in their decisions. Finally, this text will assist law professors when seeking to explain the law to students, and will also help law students and members of the general public to gain an understanding of Canadian law.

Kevin P. McGuinness, LL.B., LL.M., S.J.D., is a retired Ontario lawyer with more than 40 years’ experience in practice and was Counsel in the Crown Law Office of the Ontario Ministry of the Attorney General. His principal areas of practice included corporate commercial law and debtor-creditor remedies. Previously, he has taught law in Canada, England and Australia and worked in various legal capacities in both provincial and municipal government, private practice and as in-house counsel to major corporations. He is the author or co-author of more than 30 legal texts, including Canadian Business Corporations Law, 3rd Edition, Canadian Civil Procedure Law, 1st and 2nd Editions and The Practitioner’s Evidence Law Sourcebook (the latter two titles with Master Linda Abrams) and the Business Corporations and Guarantee and Indemnity titles for Halsbury's Laws of Canada.