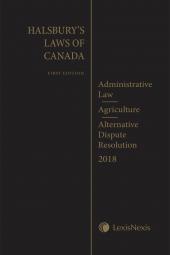 Halsbury's Laws of Canada - Administrative Law (2018 Reissue) volume provides a straightforward and accessible discussion of the rules that govern the activities of administrative agencies of government in Canada. Examining the body of general principles which shape the exercise of powers by public authorities, this clear narrative is an ideal general reference for lawyers and jurists or academics seeking a basic statement of the law in this important area. Topics covered include:

The law which regulates agriculture is drawn together from several "black letter" areas of private law (including the law of contracts, torts and property) and public law (including criminal law, regulatory law, administrative law and constitutional law). Activities relating to agriculture are not only affected by the regulatory effects of federal and provincial legislation directly targeting the sector, but also by a large body of law of general application that affects producers, processors and distributors of agricultural products.

Halsbury's Agriculture (2018 Reissue) discusses the many aspects of private and public law that regulate how farming is carried out in Canada, including:

Donald Buckingham, B.A. (Hon.), LL.B., D.I.L., LL.D., learned early on where food comes from – he was raised on a family farm specializing in beef cattle and field crops in northwestern Saskatchewan. Leaving the production end of agriculture, he went to the University of Saskatchewan to become an agricultural lawyer. After earning his Bachelor of Laws, Dr. Don went on to complete graduate studies in agricultural trade law in England. He then obtained a doctorate in law jointly at Montpellier, France and Ottawa, Ontario with a focus on the national and international dimensions of food labelling. From 1990 to 2006, Dr. Don was a law professor and legal researcher at Western University, the University of Saskatchewan and the University of Ottawa. He served as legal counsel at Agriculture and Agri-Food Canada (2006-2009) and Chair of the Canada Agricultural Review Tribunal (2009-2017). Since 2017, Dr. Don has been President and CEO of CAPI (the Canadian Agri-Food Policy Institute) in Ottawa. He has also written numerous articles, chapters and books on agriculture and food law. Dr. Don has always enjoyed working both ends of the farm-to-fork spectrum – today, he tends a community garden in Ottawa, owns a couple of cows in Saskatchewan and acts as chef de cuisine in the home he shares with his wife in our nation’s capital.

View all books by Donald Buckingham (3)

View all books by Markus Rotterdam (4)

View all books by Guy Régimbald (6)

View all books by Matthew Estabrooks (1)