This collection of 13 papers examines many of the freedoms listed in section 2 of the Charter that have been “forgotten” in the sense that they have not received (much) interpretation in jurisprudence or discussion in legal scholarship.
by Dwight Newman (General Editor) , Derek Ross (General Editor) , Brian Bird (General Editor)
Publisher: LexisNexis Canada
Publication Language: English 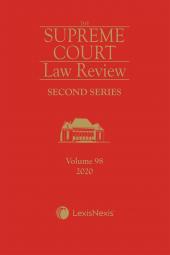 This collection of 13 papers examines many of the freedoms listed in section 2 of the Charter (including freedom of conscience, freedom of thought, freedom of the press, freedom of peaceful assembly and freedom of association) that have been “forgotten” in the sense that they have not received (much) interpretation in jurisprudence or discussion in legal scholarship.

The papers first discuss the jurisprudential background of the Charter and then the common themes and connections between different forgotten freedoms. The volume then analyzes in depth each of the fundamental freedoms. Also included is an appendix outlining the history of section 2 of the Charter and resulting sources, as well as comparative provisions in international human rights instruments, that may be used for further research.

The collection is divided into five parts:

Dwight Newman, Q.C., B.A., J.D., B.C.L., M.Phil., D.Phil., is a Professor of Law and Canada Research Chair in Indigenous Rights in Constitutional and International Law at the University of Saskatchewan, where he started in a faculty position in 2005 and has also served a three-year term as Associate Dean. He has also taught during shorter visiting terms at Alberta, McGill and Oxford. In recent years, he has been a James Madison Visiting Fellow at Princeton University, a Lone Mountain Fellow at the Property and Environment Research Center, a Professeur invité at the Université de Montréal Faculté de Droit, and a Herbert Smith Freehills Visitor at Cambridge University. In early 2018, he was a visitor at the University of Western Australia. Dr. Newman has published around a hundred articles or book chapters and a dozen books. His books include two monographs on the duty to consult doctrine, a book on Natural Resource Jurisdiction in Canada (2013), both the Charter of Rights volume of Halsbury’s Laws of Canada and The Law of the Canadian Constitution (a general treatise with co-author Guy Régimbald) (2013; second edition 2017), and Mining Law of Canada (2018). His edited collections include Religious Freedom and Communities (2016) and Business Implications of Aboriginal Law (2018).

His writing has been cited by all levels of Canadian courts, including repeatedly by the Supreme Court of Canada. He is a Munk Senior Fellow of the Macdonald-Laurier Institute and has contributed to policy discussions by publishing a number of think tank reports. He also serves as an expert member of the International Law Association (ILA) Committee on Implementation of the Rights of Indigenous Peoples and contributes to ongoing discussions on international norms on related issues. He has delivered dozens of presentations to a variety of audiences on six continents and has published many op eds in leading Canadian and American newspapers. Prior to entering a faculty role, Dr. Newman clerked for Chief Justice Lamer and Justice LeBel at the Supreme Court of Canada, worked for NGOs in South Africa and Hong Kong and for the Canadian Department of Justice, and completed his graduate studies at Oxford University as a Rhodes Scholar. He is a member of the Ontario and Saskatchewan bars and he has done legal work for industry, government and Indigenous communities on constitutional law issues, as well as consulting work on resource issues for international investment entities. In 2017 he was named to the College of the Royal Society of Canada, and in 2018 he was designated a Queen’s Counsel.

View all books by Dwight Newman (11)

Derek B.M. Ross, LL.B. (Western), LL.M. (Toronto), is the Executive Director and General Counsel for Christian Legal Fellowship. He has acted for public interest interveners in a number of Charter cases, including before the Supreme Court of Canada. He has also presented before legislative and parliamentary committees on constitutional and legal issues.

Derek currently serves as Secretary of the Ontario Bar Association’s Constitutional, Civil Liberties and Human Rights Law section, and also sits on the executive of the Canadian Bar Association’s Constitutional and Human Rights section. He is editor-in-chief of the Christian Legal Journal, a periodical examining the relationship between law and religion. He was also General Editor of Assisted Death: Legal, Social and Ethical Issues after Carter (LexisNexis Canada, 2018), Canadian Pluralism and the Charter: Moral Diversity in a Free and Democratic Society (LexisNexis Canada, 2019) and The Forgotten Fundamental Freedoms of the Charter (LexisNexis Canada, 2020).

View all books by Derek Ross (8)

Brian Bird is an Assistant Professor at the Peter A. Allard School of Law at the University of British Columbia. In 2019-2020, Brian was a John and Daria Barry Postdoctoral Research Fellow in the James Madison Program in American Ideals and Institutions at Princeton University. His research focuses on constitutional law, constitutional theory, and human rights. His writing on these topics has appeared in several academic journals and media outlets. A lawyer by training, Brian clerked for judges at the Supreme Court of British Columbia and for Justice Andromache Karakatsanis at the Supreme Court of Canada. Brian completed his doctorate in law at McGill University. He also holds a B.C.L. from the University of Oxford, a J.D. from the University of Victoria, and a B.A. from Simon Fraser University.

View all books by Brian Bird (4)