This text offers a theoretical and pragmatic analysis of the different aspects of the Supreme Court of Canada's decision in Reference re Secession of Quebec, including the background and context leading up to the opinion.
by Frédéric Bérard (Author) , Stéphane Beaulac (Author)
Publisher: LexisNexis Canada
Publication Language: English 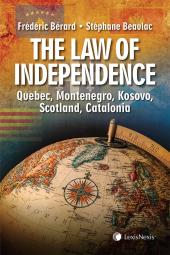 In August 1998, the Supreme Court of Canada handed down one of the most important decisions in recent history: Reference re Secession of Quebec. … The 1998 Reference is most significant because, for the very first time in modern history, a national court considered the tough question of the legal characterization of secession by a federated unit (a province) within a democratic state.

So begins the introduction to this new volume, The Law of Independence, by leading academics and lawyers Frédéric Bérard and Stéphane Beaulac. As they explain, Reference re Secession of Quebec is a landmark judgment regarding the legality, under both Canadian and international law, of a unilateral secession of Quebec from Canada and their text offers a theoretical and pragmatic analysis of the different aspects of the Supreme Court of Canada's decision, including the background and context leading up to the opinion. A comparative study of the nationalist movements and/or referenda in Montenegro, Kosovo, Scotland and Catalonia is also conducted, with a view to shedding light onto the law of independence.

Comprehensive content
The Law of Independence succinctly summarizes and analyzes the seminal 1998 opinion as well as the international influence of the case on other jurisdictions. Written in a clear and easy-to-understand manner, this authoritative text:

A useful resource
An engaging read, The Law of Independence would be especially valuable to:

Frédéric Bérard, LL.B., M.A., Ph.D., is co-director of the National Observatory on language rights and a adjunct professor at the Faculty of Law at the Université de Montréal. He has been recognized by the Revue des libraires as "one of the top 10 essayists under 40 who are transforming today's Québec." He holds a Bachelor of Laws from the Université de Montréal (1999-List of Excellence) an M.A. in political science from McGill University and a Ph.D. (Mention of Excellence) in public law from Université de Montréal. Dr. Bérard is a seven-time winner of the André-Morel Excellence in Teaching Award (UdeM) and won an identic award at McGill University. A TED speaker, he is a sought-after commentator, as well as a political and legal columnist with various media, including Radio-Canada, TVA and Journal Métro.

View all books by Frédéric Bérard (2)

Stéphane Beaulac, LL.L., LL.B., LL.M., Ph.D., is a full professor at the Université de Montréal, and, for 2016-17, a Flaherty visiting professor (Ireland). His background is bijural: civil law at Ottawa (summa cum laude) and common law at Dalhousie (first in the national program); he clerked at the Supreme Court of Canada. Dr. Beaulac earned his LL.M. (first class honours) as well as a Ph.D. in international public law at the University of Cambridge. He began his academic career at Dalhousie Law School in 1998. He was a Max Weber Fellow at the European University Institute in Florence, a Neil MacCormick Fellow at the University of Edinburgh School of Law and a visiting professor in Amsterdam, Ulster and Trento. His writings have won awards and have been cited by the International Court of Justice in The Hague. A public intellectual, he regularly contributes to current debates in the media.

View all books by Stéphane Beaulac (10)