This is the comprehensive guide on trade mark law enabling practitioners to provide clients with effective advice with the best support and authority.
by Ashley Roughton (Author)
Publisher: LNUK
Publication Language: English 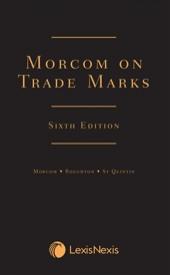 Morcom on Trade Marks (formerly known as Modern Law of Trade Marks) is a comprehensive guide on trade mark law, enabling practitioners to provide clients with effective advice with the best possible support and authority. It includes detailed analysis of important UK and European legislation and in-depth commentary on key cases.

This new sixth edition has been fully revised and updated to take into account all the latest developments since the last edition published in 2016.

View all books by Ashley Roughton (2)