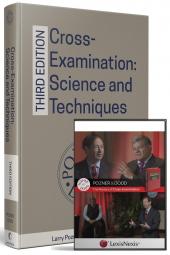 Cross-Examination: Science and Techniques, Third Edition is an extensive revision and reorganization of Larry Pozner and Roger J. Dodd's classic work, written to meet the needs of today's trial attorneys. Pozner and Dodd's signature techniques and methodologies, which have brought them acclaim as the nation's leading experts on cross-examination, are illustrated with numerous new examples added specifically for the Third Edition.

With 40 years' experience in courtrooms and before juries, Larry Pozner is a founding partner of the firm Pozner and Reilly, Denver Colorado. Larry focuses his practice on complex civil and criminal litigation – as well as the lecture circuit. He is litigation counsel for the Denver Broncos Football Club. In the area of complex commercial litigation, Larry represents both plaintiffs and defendants in cases involving fraud (including healthcare fraud), professional malpractice, breach of contract, litigation against trustees, environmental matters, theft of trade secrets, and copyright and trademark infringement. In the criminal arena, Larry began his career as a public defender – and continues his high profile criminal defense work as a private practitioner.

In 1998, he was elected president of the 10,000 member National Association of Criminal Defense Lawyers. Larry supplements his civil and criminal practice with publishing, television and radio legal commentary, and lecturing on trial practice. He is well-known among fellow trial attorneys as the co-author of Cross-Examination: Science and Techniques – America's best-selling publication on the subject of cross-examination. He has presented his full-day CLE program on this subject to state bar associations, plaintiff and defense organizations and governmental agencies more than 250 times. When a trial attracts national attention, the national news media often seek Larry's perspective. He was a NBC News legal analyst for the Jon Benet Ramsey case and the Oklahoma City bombing trials. He has provided legal analysis for such shows as the NBC Nightly News, The Today Show, Keith Olbermann, Fox News, CNN, NPR and Court TV.

In recognition of his skills and accomplishments at trial, Larry is regularly listed in Colorado Super Lawyers® (Top 10, Top 50 and Top 100 lawyers in the state). He was named the 2015 Denver Criminal Defense: White-Collar "Lawyer of the Year" and the 2013 Denver Criminal Defense: Non-White Collar "Lawyer of the Year" by The Best Lawyers in America® and has been listed in that publication for 28 consecutive years. For many years, he served on the adjunct faculty of the University of Denver Sturm College of Law where he was voted "Best Professor." Larry's colleagues in the legal profession value his courtroom skills and experience?and flock to attend his presentations. He has traveled to 48 states (as well as Canada and Puerto Rico) to deliver more than 400 lectures on subjects relating to trial skills, and has served on the faculty of several trial practice institutes. For the last seven years, he and partner Dan Reilly have been invited to address judges attending the annual Colorado Judicial Conference. Their annual presentation deals with some unusual aspect of trial evidence ranging from courtroom demonstrative aids to electronic evidence.

Roger is a frequent guest and commentator on television programs, including Court TV, Good Morning America, Geraldo at Large, and is co-author of Cross-Examination: Science and Techniques. He is one of a select group of attorneys to receive the distinguished Super Lawyer rating in multiple states. Noteworthy Awards and Recognitions include Best Lawyers in America (1991-present), AV®Martindale- Hubbell® Peer Review RatedSM, Bar Register of Preeminent Lawyers™, Georgia Super Lawyers (2004-present), Florida Super Lawyers (2009-present), Who's Who in America, Who's Who in American Law, and Who's Who in the World.

In 1976, Roger received his J.D. from the University of Pittsburgh School of Law. He earned his B.A. from Bucknell University in 1973. In 2014, Roger earned an L.L.M. in Advocacy from Stetson Law School. Roger was admitted to practice law in Georgia in 1976, Florida in 1977, and in Utah in 2011. He is also admitted to all applicable state and U.S. Courts, the Armed Forces Court of Appeals, and the U.S. Supreme Court. He is an advocate in the American Board of Trial Advocacy (ABOTA). His present and past faculty positions include positions with the National Criminal Defense College (1986-present), Georgia Institute of Trial Advocacy (1986-1991), and Advanced Cross Examination – National Criminal Defense College.