The Law of Treaties Between the Crown and Aboriginal Peoples

This book provides authoritative and comprehensive information and insight into the law concerning the treaties between the Aboriginal people in Canada and the Crown in Canada.
by J. Timothy S. McCabe (Author)
Publisher: LexisNexis Canada
Publication Language: English 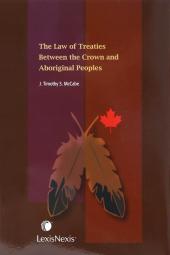 The First and Only Comprehensive Study on Crown-Aboriginal Treaty Law

This highly anticipated text is a follow-up to Aboriginal law expert Timothy McCabe's 2008 book, The Honour of the Crown and its Fiduciary Duties to Aboriginal Peoples. In writing this comprehensive volume, Mr. McCabe brings close to 25 years of experience as counsel for matters relating to Aboriginal law in Ontario, including numerous appearances in appeals and constitutional interventions in the Supreme Court of Canada. Mr. McCabe's study provides authoritative and comprehensive information and insight into the law concerning the treaties between the Aboriginal peoples and the Crown in Canada. This book:

Why Should Readers Buy This Book?

J. Timothy S. McCabe, Q.C., practised in the field of Aboriginal law at the Ontario Ministry of the Attorney General, Crown Law Office – Civil, for 25 years, during which he conducted several cases in the Court of Appeal and the Supreme Court of Canada. He is currently in private practice and has acted as counsel and advisor to the Ontario government on Aboriginal law matters.