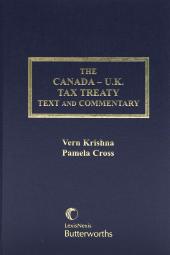 The Canada-U.K. Tax Treaty - Text and Commentary is the first comprehensive, up-to-date analysis of this important tax treaty. Next to the United States, the United Kingdom is Canada's most significant trading partner. Commentary includes the fundamentals of international tax treaties.

-  Clause-by-clause comparison of OECD Model and Canada-U.K. Tax Treaty - understand how this tax treaty differs from others

Plus extensive analysis of these key concepts:

-  Electronic commerce - determine which country has taxable jurisdiction over revenues

-  OECD Model Tax Convention on Income and on Capital

Vern Krishna, C.M., Q.C., B.Comm., MBA, LL.B., LL.M., DCL, LL.D. (hc), FRSC, LSM, FCPA, is Counsel with Tax Chambers LLP, and Canada’s leading authority on income taxation in Canada. A Professor of Law at the University of Ottawa, Mr. Krishna graduated from the University of Manchester (U.K.) with a B. Comm.; the University of Alberta with an MBA and an LL.B.; Harvard Law School with an LL.M.; and Cambridge University (U.K.) with a Diploma in Comparative Law. He is a member of the Ontario Bar (1983), a Fellow of the Royal Society of Canada, a Fellow of the Chartered Professional Accountants of Canada, Queen’s Counsel, and a member of the Order of Canada. Mr. Krishna was the Treasurer of the Law Society of Upper Canada (2001–2003) and is the author of numerous books on domestic and international taxation, including the Halsbury’s Laws of Canada titles Income Tax (International) and Income Tax (Corporate). He is listed in Who's Who Canada, and acts as counsel in tax litigation, international tax planning, and wealth management with Tax Chambers LLP (Toronto).

View all books by Vern Krishna (10)