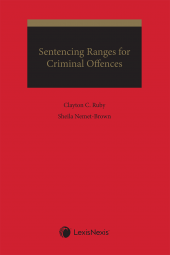 This new title is an abridged version of Clayton Ruby’s highly respected publication, Sentencing, 10th Edition, and particularly Chapter 23, which examines the historical and modern considerations applied in determining ranges of sentence for particular offences. Sentencing ranges reflect the principle of parity, which requires that similar offenders who commit similar offences in similar circumstances should receive similar sentences.

This book will be a quick and easy resource for determining the current ranges for over 40 specific offences under the Criminal Code and the Controlled Drugs and Substances Act (CDSA). For each offence, readers will be able to:

Clayton C. Ruby, C.M. is a partner with Ruby Shiller, Barristers in Toronto, and is widely recognized as one of Canada's leading lawyers. Since being called to the Bar in 1969, Mr. Ruby has maintained an extensive criminal, constitutional and administrative law practice, and has served as counsel in innumerable high-profile human rights, Aboriginal and criminal cases. He has been a Bencher of the Law Society of Ontario since 1977. In 2006 he became a Member of the Order of Canada and was awarded an honorary Doctor of Laws degree by the Law Society of Ontario.

Sheila Nemet-Brown, B.A. (Hons.), LL.B., is a Senior Content Development Associate for LexisNexis Canada. She obtained her law degree from Osgoode Hall Law School. She is also the co-author of the Public Utilities and Legislatures titles for Halsbury’s Laws of Canada, and has served as contributing editor for numerous other Halsbury's titles. She also developed and edited the Canada Criminal Sentencing Digest and the Canada Quantum Digest series. She is also co-author, with Clayton Ruby, of Sentencing Ranges for Criminal Offences.

View all books by Sheila Nemet-Brown (23)