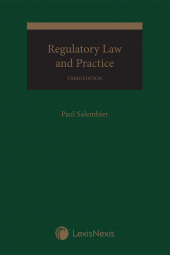 While legal professionals are no strangers to regulations, the perplexity of the mechanisms to challenge the validity of regulations and rules makes regulatory law an area of specialized knowledge beyond the reach of most lawyers and government officials. The process by which regulations are made, and the controls imposed by legislatures on the law-making powers of regulators, are also a ‘black box' little understood by government officials and legislators themselves. Regulatory Law and Practice, 3rd Edition takes a multi-jurisdictional approach to regulatory law principles and regulatory processes, describing case law and regulatory processes in jurisdictions across the Commonwealth and beyond.

J. Paul Salembier, B.Sc., LL.B., LL.M., is a former General Counsel with the Canadian Department of Justice, with more than three decades in government, largely spent drafting and developing regulations and statutes. He has taught regulatory law and statutory interpretation, and currently teaches legislative drafting as an adjunct professor at Queen's University Faculty of Law. He has also authored Legal and Legislative Drafting, 2nd Edition (LexisNexis 2018), Regulatory Law and Practice, 3rd Edition (LexisNexis 2021) and has written articles on regulatory law, legislative drafting and statutory interpretation.