This small yet important collection of papers reviews the development of private law in Canada since Confederation in 1867.
by Matthew P. Harrington (General Editor)
Publisher: LexisNexis Canada
Publication Language: English 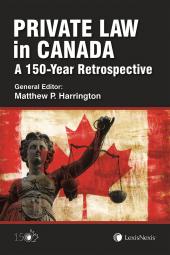 This timely collection of papers reviews the development of private law in Canada since Confederation in 1867. The second title in the 150-Year Retrospective series, this book is comprised of five insightful essays – that offer a thorough and well-researched review of jurisprudential developments in various areas of private law in Canada, including property, labour and employment, contracts, wills and estates, and torts. Featuring valuable perspectives from leading authorities on the law governing private relationships in Canada, this volume is a unique contribution to Canadian scholarship.

Included in Private Law in Canada: A 150-Year Retrospective:

An Insightful Resource
This volume has a rightful place on the bookshelves of:

Matthew P. Harrington is Professor of Law in the faculty of law at the Université de Montréal, and director of the faculty's common law programme. A graduate of McGill University (B.Th.), Boston University (J.D.) and the University of Pennsylvania, (S.J.D.), Harrington's teaching and research interests are in the area of private law, especially as it relates to the law of property and trusts.