This book offers an extensive examination of the law concerning the immunity – also known as privilege – of federal and provincial Members of Parliament and senators with respect to their political activities and comments in the House of Commons and the Senate.
by Joseph Maingot (Author)
Publisher: LexisNexis Canada
Publication Language: English 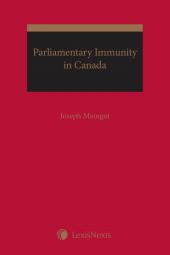 "An informative volume that will inform its readers of the rules, laws and practices that make our parliamentary system function so well for the benefit of all of our citizens."
– From the Foreword by The Honourable Peter Milliken P.C., OC, F.R.S.C., Former Speaker, House of Commons, 2001-2011

As respected lawyer and author, Joseph Maingot, states in the Introduction to this new volume, Parliamentary Immunity in Canada, "the principal subject of this text will be privileges, immunities, and powers of the Houses of Parliament and their Members, particularly those of the House of Commons … [as well as those] held and enjoyed by the Senate and its Members."

In fact, this is the only book that covers the subject of parliamentary immunity in Canada, and it has now been brought fully up-to-date by the expert who has been writing about this topic for the past 35 years.

Comprehensive coverage
Parliamentary Immunity in Canada offers an extensive examination of the law concerning the immunity – also known as privilege – of federal and provincial Members of Parliament and senators with respect to their political activities and comments in the House of Commons and the Senate.

This unique treatise covers virtually every aspect of immunity, from privilege of freedom of speech and privilege of freedom from arrest, to the publication of parliamentary papers, proceedings and procedure in the House of Commons, and the jurisdiction of the courts over the Senate and House of Commons. The book also features a special chapter on the Canadian Charter of Rights and Freedoms as it relates to and intersects with parliamentary privilege.

In addition, Parliamentary Immunity in Canada includes insightful discussion about the most recent relevant jurisprudence, including the precedent-setting Supreme Court of Canada decision in Canada (House of Commons) v. Vaid and the significant Speaker's rulings made in the House of Commons since the publication of the author's previous work in this area, Parliamentary Privilege in Canada, 2nd Edition in 1997.

Handy reference
This resource provides an in-depth analysis of parliamentary immunity and its related practices and procedures, and would be particularly valuable to:

J.P. Joseph Maingot, Q.C., was a Law Clerk and Parliamentary Counsel to the House of Commons. Now retired, he is also a former member of the Law Reform Commission of Canada. In addition to this volume, Joseph authored both the English and French language versions of Parliamentary Privilege in Canada (1st and 2nd editions of the English-language versions published in 1982 and 1997, respectively), as well as Politicians Above the Law with David Dehler, Q.C., which is also known at Westminster. He has advised on parliamentary matters in Canada and in Yemen, the Kyrgyz Republic (Kyrgyzstan and East Timor).

View all books by Joseph Maingot (1)