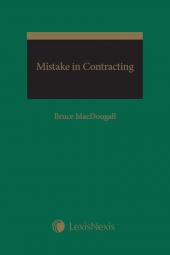 "This text completes what LexisNexis is marketing as their “Truth in Contracting” trilogy. The first two books in the series were Estoppel (second edition published in 2019) and Misrepresentation (2016), all written by Bruce MacDougall, a professor at the University of British Columbia…

Libraries looking to expand their contract law holdings, including academic law libraries, should consider purchasing this book, as well as libraries serving lawyers involved in commercial litigation and resolving contractual disputes. Libraries with one or both of the first two books in this series in their collections should complete the set with Mistake in Contracting to provide their patrons with complete access to a detailed explanation and critique of the law in this area."

"What happens if I find myself a party to a contract I entered into ‘by mistake'?"

So begins the Preface of Bruce MacDougall's latest publication, Mistake in Contracting. Joining other publications, Misrepresentation and (Dis)Honest Performance in Contracts, 2nd Edition (2021) and Estoppel, 2nd Edition (2019), this third book in MacDougall's trilogy on "truth in contracting" aims to answer that question by bringing "some order to the law on mistake in contracting." This is not necessarily an easy task, as he explains: "What seems like a simple question is surprisingly complicated, both in terms of understanding what that question means or encompasses and also in terms of how the law will or will not respond to such a situation."

That said, MacDougall delves into the topic with committed enthusiasm, and in the process, sheds valuable new light on this complex subject.

Comprehensive coverage
Mistake in Contracting is divided into two parts.

Part A examines the issues that unite the different aspects of mistake and make it a "family" of doctrines, as well as the relationship between the family of mistake doctrines and other doctrines that arise in contract contexts.

In Part B, readers will learn about the various context and doctrines of mistake. In particular, attention is paid to mistake inside the contract, such as errors connected to the obligations the parties have taken on or the very nature of the transaction – non est factum. Other examples of this type of mistake are examined in chapters on errors in particular terms in the contract or in how the contract was recorded. Mistake in the background to the contract is discussed in detail in chapters relating to erroneous assumptions made by the parties or by one party that, at least in part, induced the contract, as well as mistake as to the identity of the other party.

Ultimately, lawyers and other legal professionals can rely on this text to provide a comprehensive treatment and analysis of developments in the area of mistake in both Canada and the U.K., including the recent Supreme Court of Canada cases that address the issue of rectification.

A valuable resource
Mistake in Contracting would be useful additions to the libraries of:

Bruce MacDougall, B.A. (Hons.) (Acadia), B.C.L. and M.A. (Oxon.), LL.B. (Dal.), is Professor of Law at the University of British Columbia, and Chair of the Judicial Council of the Tsawwassen First Nation. He has three decades’ experience teaching courses in contract and commercial law in both the common law jurisdictions of Canada and in Québec. He has also taught these courses in the United States, England and Thailand. A Rhodes Scholar and former lawyer in Ontario and British Columbia, he is actively involved in continuing legal education programs and has won the teaching excellence award at UBC. He has also participated in law reform projects on commercial law in British Columbia. His publications include Estoppel, Mistake in Contracting and Misrepresentation (all treatises published by LexisNexis Canada) as well as the Estoppel title for Halsbury’s Laws of Canada.

View all books by Bruce MacDougall (7)