This first-ever collection of essays about Chief Justice Lamer examines his legacy of Charter interpretation and the protection of Canadians' rights, as well as explores his lengthy career and his personal conception of the law.
by Adam M. Dodek (Author) , Daniel Jutras (Editor)
Publisher: LexisNexis Canada
Publication Language: English 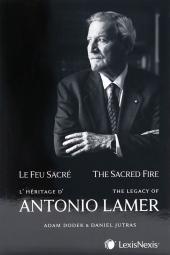 "As this collection of essays demonstrates, Chief Justice Lamer had a profound effect on the development of many areas of Canadian law. His pioneering judgments helped define the rights of Canadians. Many aspects of our society, from Aboriginal rights, to language rights, to the rights of the criminal accused, would exist in a very different form were it not for his courage and leadership on the Bench."

-From the Foreword by the Right Honourable Beverley McLachlin, Chief Justice of Canada

Chief Justice Lamer's Impact on the Charter of Rights and Freedoms

The Right Honourable Antonio Lamer holds the distinction of serving as a Justice of the Supreme Court of Canada during two very significant moments of constitutional history - enactment of the Charter of Rights and Freedoms (1982) and the Quebec Seccession Reference (1998). One of the longest-serving judges of his era, Chief Justice Lamer played an instrumental role in developing Canada's new culture of rights under the Charter.

In this first-ever collection of essays about Chief Justice Lamer, academics, former clerks, and members of the judiciary examine his legacy of Charter interpretation and the protection of Canadians' rights.

Explore Chief Justice Lamer's lengthy career, his personal conception of the law, and why he is recognized today as one of Canada's most influential judges. Essays cover:

Who Should Buy this Book?

"The office of Chief Justice of Canada is obviously of the highest importance to our justice system and yet, after spending an informal afternoon with someone who had occupied it, I was left with the impression that Chief Justice Lamer affirmed the humanity underlying it all."

-David Asper, Lawyer and businessman and co-counsel in the Milgaard Reference

Adam M. Dodek, B.A., J.D., LL.M., teaches at the Faculty of Law (Common Law Section) at the University of Ottawa. His areas of research include public law, the legal profession and legal ethics. A member of the Law Society of Upper Canada and the State Bar of California, he has practised law in San Francisco and Toronto, and clerked for the U.S. Court of Appeals, the Supreme Court of Israel and the Supreme Court of Canada. Between 2003 and 2006, he served as Senior Policy Adviser and then Chief of Staff to the Attorney General of Ontario. He is a founding member of the Canadian Association for Legal Ethics (CALE) and has advised lawyers, the Canadian Bar Association and the Federation of Law Societies on solicitor-client privilege issues. He is General Editor of our Canadian Legal Practice.

Adam was voted as one of the Top 5 Changemakers on The Top 25 Most Influential 2014 list in Canadian Lawyer Magazine.

Daniel Jutras joined the Faculty of Law, McGill University in 1985 after clerking with Chief Justice Antonio Lamer at the Supreme Court of Canada. He served as Dean between 2009 and 2016 and now holds the Wainwright Chair in Civil Law. From 2002 to 2004, Professor Jutras was the Executive Legal Officer of the Supreme Court of Canada, under Chief Justice Beverley McLachlin. Over the past five years, he was appointed twice by the Supreme Court to act as amicus curiae in landmark cases in public law. Daniel Jutras is Advocatus Emeritus and a recipient of the Merit of the Bar of Québec.

View all books by Daniel Jutras (4)