This collection of papers dedicates itself to the legacy of The Honourable Justice Marshall Rothstein, who became a judge of the Supreme Court of Canada in 2006 and retired in 2015. The papers celebrate His Honour's contributions to the legal developments in many areas of the law.
by Lisa M. Kelly (General Editor) , Ivo Entchev (General Editor)
Publisher: LexisNexis Canada
Publication Language: English 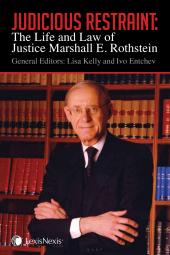 "…a distinguished judge,…characterized by his passion for, and commitment to, the law…."
– The Rt. Hon. Beverley McLachlin, P.C., Chief Justice of Canada

This collection of papers dedicates itself to the legacy of The Honourable Justice Marshall Rothstein, who became a judge of the Supreme Court of Canada in 2006 and retired in 2015. The papers celebrate His Honour's contributions to the legal developments in many areas of the law.

The collection of papers:

PART I: THE ROLE OF THE JUDGE

A great addition to your library

Lisa M. Kelly, B.A. (UBC), J.D. (Toronto), S.J.D. (Harvard), is an Assistant Professor at Queen's University, Faculty of Law, where she teaches criminal law and evidence. Before joining Queen's, she was a Postdoctoral Fellow at Columbia Law School and the Center for Reproductive Rights in New York City. Lisa has published in the areas of family law and reproductive justice. Her doctoral dissertation – Governing the Child: Parental Authority, State Power, and the School in North America – analyzed legal struggles from the mid-nineteenth century to the present over race, corporal punishment and the disciplinary reach of school authorities. Lisa has been a Trudeau Scholar, a Frank Knox Memorial Fellow, and a Fulbright Scholar. From 2008-09, she clerked for the Honourable Justice Marshall E. Rothstein of the Supreme Court of Canada.

Ivo has represented investors, insurers, and trustees in multi-billion dollar lawsuits accusing several major U.S. banks of malfeasance in connection with their securitization and marketing of residential mortgage loans. He has represented foreign investors in arbitration disputes under international investment treaties and patent holders in infringement actions pertaining to core Internet and telecommunication technologies. Ivo has assisted media clients on a range of freedom of the press,defamation, and intellectual property issues, including during pre-publication review of reporting and in court proceedings challenging state- imposed restrictions on speech. His pro bono practice includes a co-counsel partnership with the American civil liberties union.

Ivo is licensed to practice law in Canada and is an active member of the Canadian American Bar Association. He is trained in the common and civil law traditions. Following law school, he clerked for the Honorable Justice Marshall Rothstein of the Supreme Court of Canada, the nation's highest court.

View all books by Ivo Entchev (1)