This title deals with the collection by unsecured creditors of debts owed by solvent debtors and discusses the federal-provincial overlap in the area of insolvency that results in many provincial statutes having application to insolvent debtors.
by Milton Davis (Author) , Catherine Morin (Author)
Publisher: LexisNexis Canada
Publication Language: English 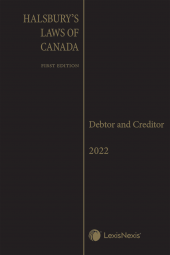 A right without a remedy is no right at all, and this is no better demonstrated than with respect to the ability to collect debts that are owed. Halsbury's Debtor and Creditor (2022 Reissue) deals with the collection by unsecured creditors of debts owed by solvent debtors and discusses the federal-provincial overlap in the area of insolvency that results in many provincial statutes having application to insolvent debtors. This valuable title includes a discussion of important issues such as:

Milton Davis, B.A., LL.B., was called to the bar in 1978. Since that time, he has practiced in the area of commercial litigation, specializing in banking and real estate litigation, corporate and shareholder disputes, mortgage remedies and professional negligence claims. Mr. Davis was certified as a specialist in civil litigation in 1985.

Mr. Davis has been involved as counsel in over 200 reported decisions, at all levels, including the Supreme Court of Canada. He has acted as counsel in an extensive number of leading cases involving professional negligence by lawyers and other professionals. Mr. Davis has also acted in many significant real estate and mortgage cases at both the trial and appellate level. In March 2012, Mr. Davis argued the first real estate case heard by the Supreme Court of Canada in 15 years. Two of the foremost appeals in Canada involving shareholders rights were successfully argued by Mr. Davis.

In addition to his courtroom experience, Mr. Davis has acted to recover millions of dollars for plaintiffs in lawyer malpractice cases. He has successfully prosecuted to trial or settlement more than forty of these cases. Amongst those cases are precedent-setting decisions that have defined the standard of care for lawyers practicing in various fields. He has also successfully defended lawyers and other professionals in malpractice claims.

For over thirty years, Mr. Davis has represented some of the largest financial institutions in Canada. He continues to be on the recommended list of counsel for one of Canada's largest banks.

Since his call to the bar in 1978, Mr. Davis has been a frequent lecturer and instructor at the Law Society of Upper Canada and at the Osgoode Hall Law School, Trial Advocacy Program. He was a lecturer in civil procedure and trial advocacy for the Bar Admission Course from 1985 to 1990. He has lectured and written extensively in the areas of real estate, mortgage remedies, injunctions, civil procedure, evidence and trial advocacy. He was a lecturer at the Canadian Bar Association Annual Institute in 1985, 1999 and 2000.

View all books by Milton Davis (1)

Catherine Morin, B.Mus. (Hons.), LL.B., is the Supervising Editor, Supplementation for Halsbury's Laws of Canada. She is responsible for the creation of supplements for all Halsbury's titles, and also oversees the semiannual updating of the Halsbury's Companion: Guide and Consolidated Index, as well as the updating of glossaries for Halsbury’s titles. A former practitioner, Catherine has been responsible for restructuring and overseeing the production of various digest products, including NetLetters™ and the Canadian Weekly Law Sheet. With extensive legal research and writing experience, she has authored several Halsbury's Laws of Canada titles, including: Holidays; Hospitality; Missing Persons and Absentees and Roads, Highways and Bridges. She is also co-author of the Halsbury's Debtor and Creditor and the Halsbury's Mines and Minerals title, and has served as a contributing editor on numerous others.

View all books by Catherine Morin (7)