This volume is the product of the author's 35 years of experience of legislative drafting, teaching and writing in this vital, but often overlooked area of law.
by John Mark Keyes (Author)
Publisher: LexisNexis Canada
Publication Language: English 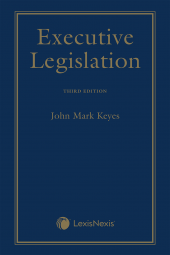 The Definitive Text on Executive Legislation in Canada
Eleven years since the release of the second edition, John Mark Keyes has produced an update of Canada's definitive textbook on legislative instruments made by executive governmental authorities – Executive Legislation. This volume is the product of the author's 35 years of experience of legislative drafting, teaching and writing in this vital, but often overlooked area of law.

The book begins with a threshold examination of what constitutes executive legislation (which embraces instruments most commonly referred to as "regulations") in the context of a Westminster-based legal system that authorizes and delimits its effect as law. It then considers the constitutional framework for delegating executive legislative authority and the institutional (parliamentary and judicial) controls on the delegation and exercise of this authority. Next, it considers how executive legislation is made and operates within this context and provides a comparative law perspective ranging not only throughout Canada, but also across comparable Commonwealth jurisdictions (the UK, Australia and New Zealand).

What’s New in the 3rd Edition

An Ideal Resource For

John Mark Keyes, B.A., LL.B., LL.M. graduated from the Faculty of Law at the University of Toronto and was called to the Bar of Ontario in 1981. He obtained a Diploma in Legislative Drafting in 1983 from the University of Ottawa and an LL.M. from the same university in 1985.

Mr. Keyes joined the Department of Justice (Canada) in 1984, working first in the Privy Council Office Section examining draft regulations, then in the Legislation Section drafting government bills. From 1999 until 2013, he worked in various managerial positions in the Legislative Services Branch, ultimately as the Chief Legislative Counsel and Assistant Deputy Minister of Justice responsible for the management of the Branch. Since leaving the Department, he has taught public law at the Faculty of Law of the University of Ottawa, including constitutional and administrative law, legislative interpretation and legal (including legislative) drafting. He is also an instructor in the Graduate Diploma Legislative Drafting Program at Athabasca University.

Mr. Keyes has published many scholarly legal articles and is a regular speaker at conferences dealing with legislative subjects. For over 20 he has been involved in organizing conferences on legislative matters for the Canadian Institute for the Administration of Justice and the Commonwealth Association of Legislative Counsel. He is also the Treasurer of this Association and the editor in chief of its publication, The Loophole. In 2020, the Canadian Bar Association recognized his work as a public sector lawyer by awarding him the John Tait Award of Excellence.