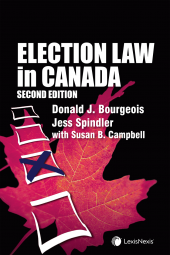 The right to vote in democratic elections may be a basic entitlement in Canada, but the rules governing our electoral process are anything but straightforward. In this new edition, authors Donald J. Bourgeois and Jessica Spindler delve into the topic of election law in Canada and provide valuable insight into this important and evolving area.

What's New In This Edition

Donald J. Bourgeois, B.A. (Hons.), LL.B., is one of Canada’s leading authorities on charities and not-for-profit organizations. He is the recipient of several awards, including the AMS/John Hodgson Award by the Ontario Bar Association in recognition of his leadership, development of the law, and service in the charitable arena, the Amethyst Award for Outstanding Achievement by Ontario Public Servants, the Queen Elizabeth II Diamond Jubilee Medal for dedication to his community and work to engage and inspire its residents, and the Mayor of Kitchener’s City Builder Award.

Mr. Bourgeois was General Counsel at the Alcohol and Gaming Commission of Ontario and has a private practice that focuses on liquor, gaming and other regulated industries in Canada. He is an adjunct professor at York University, having taught gambling law and financial accountability in government and the charitable and not-for-profit sectors. He has also written extensively on the topic of charity and not-for-profit law, including several editions of The Law of Charitable and Not-for-Profit Organizations, Charities and Not-for-Profit Fundraising Handbook, Charities and Not-for-Profit Administration and Governance Handbook and the liquor control title forHalsbury’s Laws of Canada. He is also the author of Public Law in Canada and lead author for Election Law in Canada. He has also served as an officer and director of several key community and arts organizations, and as chair and member of various municipal and provincial government organizations and advisory bodies.

View all books by Jessica Spindler (1)

View all books by Susan B. Campbell (2)