The new, updated version of this authoritative text will provide practitioners with the insight into competition law they need to successfully navigate the constantly evolving landscape. This is a student edition.
by Brian A. Facey (Author) , Dany H. Assaf (Author)
Publisher: LexisNexis Canada
Publication Language: English 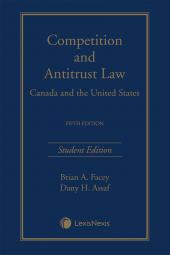 Click here for the professional edition of Competition and Antitrust Law – Canada and the United States, 5th Edition.

Brian Facey, B.A., LL.B., LL.M., is chair of the Competition, Antitrust & Foreign Investment Group at Blake, Cassels & Graydon LLP. He has long been at the forefront of this area of law and has been both the most highly nominated lawyer in Canada and “one of the world’s leading practitioners.” Brian is recognized at the top of all of the major lawyer ranking services, including as one of Canada‘s 25 most influential lawyers, and most recently “Lawyer of the Year” in 2021. He is a trusted advisor to senior counsel and CEOs of some of the world’s leading companies. Brian is past Chair of the Canadian Bar Association’s Competition Law Section and founder of its Foreign Investment Review Committee. For over 25 years, he has advised clients in hundreds of regulatory matters. He has also testified before Parliamentary Committees regarding foreign investment in Canada. As an adjunct professor for more than a decade, his treatises have been cited by all levels of court in Canada, including the Supreme Court of Canada.