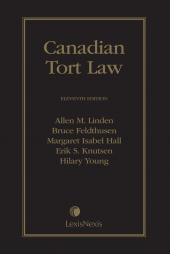 Canada's Most Frequently Cited Treatise on Tort Law
When Canadian Tort Law was first published in 1972, it became the first treatise on the law of torts in Canada. The eleventh edition continues the standard of excellence achieved by each previous edition. As the treatise most commonly cited by the Supreme Court of Canada and other Canadian courts, Canadian Tort Law has greatly influenced the development of tort law in Canada.

The text has been updated and in places substantially re-written to reflect changes in tort law in the past few years. In addition to incumbent author Bruce Feldthusen, three new leading scholars of Canadian tort law have added their expertise – Erik Knutsen on causation, Margaret Hall on nuisance and Hilary Young on defamation. Coverage includes:

What's New in this Edition

Bruce Feldthusen, B.A., LL.B., LL.M., S.J.D., is currently a professor of law at the University of Ottawa. He has been teaching and writing about tort law for over thirty-five years, primarily in Canada, but also in the United States and Australia. He was a professor of law at the University of Western Ontario from 1977 to 1999 and served as Dean of the Common Law Section of the University of Ottawa from 2000 to 2013. He is co-author of Canadian Tort Law, 11th Edition, with the late Hon. Allen Linden, Margaret Hall, Erik Knutsen and Hilary Young, as well as Canadian Tort Law, Cases Notes & Materials, 15th Edition, with Allen Linden and Lewis Klar. He is also known for his book, Economic Negligence, now in its sixth edition.

Feldthusen’s analysis of pure economic loss has been adopted by the Supreme Court of Canada and now provides the organizing framework for all negligence actions in that field. He was one of the first legal academics to study civil remedies for victims of sexual assault. Feldthusen was the research director for the Ontario Law Reform Commission’s 1989 study on Exemplary Damages, which has been cited with approval and adopted in many common law jurisdictions in Canada and abroad. He has also practised law, and works frequently as a litigation consultant on issues in tort law.

View all books by Bruce Feldthusen (4)

Margaret Isabel Hall, B.A. (Hons), LL.B., LL.M.,Ph.D., is an Associate Professor in the Faculty of Law at Thompson Rivers University, British Columbia, Canada where she teaches Torts, Advanced Torts, and Wills and Estates. Prior to joining Thompson Rivers as a founding faculty member, Prof. Hall taught torts at the University of British Columbia Faculty of Law, and the University of Ottawa Faculty of Law (Common Law), Prof. Hall has also worked in law reform (for the British Columbia Law Institute), and is the author of numerous law reform publications. Prof. Hall is the co-author of the Law of Nuisance in Canada, published by LexisNexis in 2010 (first edition) and 2015 (second edition). In 2018. a volume edited by Prof. Hall titled The Canadian Law of Obligations: Private Law for the 21st Century was published by LexisNexis and was also published in that same year as a special volume of the Supreme Court Law Reports. Prof. Hall has published extensively in the area of tort law, with a focus on nuisance, the principle from Rylands v. Fletcher, theories of systemic liability in tort law, vicarious liability, and public authority liability. Prof. Hall’s work has been cited by Canadian appellate and trial courts and in law reform reports in Canada and Australia. In addition to tort law, Prof. Hall has also published extensively on issues relating to mental capacity in the law. Prof. Hall is a Visiting Professor in the School of Criminology at Simon Fraser University, British Columbia, and was a Visiting Scholar at the Macquarie University Faculty of Law in Sydney, Australia in 2018.

Erik S. Knutsen, B.A. (Hons), J.D., LL.M. is a Professor and Associate Dean (Academic) at the Faculty of Law, Queen’s University. He has also taught in the Queen’s School of Medicine and as a core faculty member in Queens’ interdisciplinary Masters of Science in Healthcare Quality program. Professor Knutsen’s areas of academic interest include tort, insurance, and the civil litigation system. He is a co-author of Stempel & Knutsen on Insurance Coverage, an American insurance law treatise. He is also co-author of a casebook on Canadian civil litigation and one on American insurance law. His work has been cited by Canadian, American and European appellate and trial courts. Professor Knutsen earned his Masters of Law (LL.M.) from Harvard Law School, his Juris Doctor (J.D.) from Osgoode Hall Law School, and his Honours Bachelor of Arts (B.A.(Hons.)) from Lakehead University. Professor Knutsen is a recipient of the Queen’s University-wide Chancellor A. Charles Baillie Teaching Award and has three times earned the faculty teaching award at Queen’s Faculty of Law. He was previously a Visiting Assistant Professor at Florida State University College of Law, where he also earned a teaching award. He has practiced tort and insurance litigation in Thunder Bay at Carrel + Partners LLP, in Toronto at Fasken Martineau LLP, and in New York at Paul, Weiss LLP where he assisted with 9/11 World Trade Center cases. Professor Knutsen regularly consults with lawyers on cases heading to trial or appeal.

Hilary A. N. Young, B.A., M.A., Ph.D., LL.B., LL.M., is an Associate Professor in the University of New Brunswick's Faculty of Law. She obtained her Ph.D. in linguistics from Rice University, an LL.B. from the University of Ottawa Faculty of Common Law and an LL.M. from Harvard Law School. She clerked for Justice Louis LeBel at the Supreme Court of Canada and practiced civil litigation at Cox & Palmer in Halifax before beginning her academic career. Dr. Young’s research and teaching interests include defamation, privacy, tort and health law. She is one of Canada's leading defamation scholars: She has conducted a major empirical study of Canadian defamation law and has published on anti-SLAPP laws, defamatory meaning, corporate and government defamation actions, internet intermediary liability (with Emily Laidlaw) and the responsible communication defence. She is a member of the Advisory Group for the Law Commission of Ontario's Defamation Law in the Internet Age project. She is also an expert advisor on the Uniform Law Conference of Canada's project on torts for the unauthorized distribution of intimate images. Dr. Young also researches and teaches health law, with an emphasis on informed consent and end of life legal issues. Her work has been cited by courts, including the Supreme Court of Canada, and has been funded by granting agencies including the Social Sciences and Humanities Research Council of Canada.