As one of Canada's leading experts in the field of extradition law, Dr. Gary Botting provides cumulative knowledge, valuable insights and strategic advice that make this the most comprehensive resource available on current extradition law. 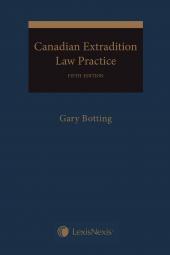 As one of Canada's leading experts in the field of extradition law, Dr. Gary Botting provides cumulative knowledge, valuable insights and strategic advice that make this the most comprehensive resource available on current extradition law. A quick cross-reference tool for lawyers and judges alike, it will also appeal to government officials charged with the responsibility of advancing extradition applications both in Canada and in requesting countries.

This book provides a solid understanding of extradition law in Canada with reference to every significant extradition case considered by courts of appeal or the Supreme Court of Canada since the current Extradition Act became law. Helpful information includes a fully annotated Extradition Act, all extant bilateral extradition treaties in their entirety, and an overview of the law and procedure of extradition with clear, easy-to-follow cross-references. The book includes the Mutual Legal Assistance in Criminal Matters Act, and relevant sections of the Criminal Code, the Immigration and Refugee Protection Act and multilateral international treaties.

For each section of the Act, you'll find:

New in This Edition
Dr. Botting traces the recent evolution of extradition law in Canada and its divergence east and west by examining every extradition appeal and judicial review judgment of the past three years as they have interpreted key decisions of the Supreme Court of Canada, including Ferras, Fischbacher and Anekwu. At the same time, he has winnowed out lower court decisions that no longer reflect the law. He focuses on the peculiarities of Canadian extradition law, including the fact that extradition is not reciprocal: Canada has its own unique definition of "double criminality" (any conduct that is criminal in Canada results in surrender for any number of foreign criminal offences in the requesting country) and accepts summaries of evidence by foreign prosecutors as "presumptively reliable" while almost universally declining to admit evidence tendered by the individual sought. Furthermore, Canada is far more concerned with honouring its perceived "international obligations" than it is with protecting individual rights.

A Must-Have Guide For:

Gary Botting, Ph.D. (English), J.D., LL.M., Ph.D. (Law), has been defence counsel in seminal dangerous offender cases since the adoption of the 1997 amendments to the dangerous offender provisions. More recently, he has been defence and appellate counsel in a number of high-profile dangerous offender cases, including R. v. Blaney, R. v. Boutilier, R. v. Haley, R. v. Hexamer, R. v. Malakpour, R. v. Patel, R. v. Shea and R. v. Walsh. Formerly a journalist with the South China Morning Post and Peterborough Examiner, Botting has a Ph.D. in English literature and M.F.A. in playwriting as well as a J.D., an LL.M. and a Ph.D. in law. He has published more than 30 books, including titles on constitutional law, wrongful conviction and extradition law. An original Paetzold Fellow at the University of British Columbia, Botting received a SSHRC post-doctoral fellowship, tenable at the University of Washington School of Law in Seattle, where he spent four years researching books on extradition and wrongful conviction law. Called to the British Columbia bar in 1991, he has been in private practice ever since, focusing on extradition and dangerous offender law and appeals.

View all books by Gary Botting (4)