The law of collective bargaining is one of the most sophisticated and dynamic areas of law in Canada. This edition includes relevant updates to case law and statutes throughout; it also has been significantly expanded to include an entire new part of the text, which features 11 new chapters that examine the practical aspects of the collective bargaining process.
by Wesley B. Rayner (Author) , Mike Rayner (Author) , James G. Knight (Author) , Brian P. MacDonald (Author)
Publisher: LexisNexis Canada
Publication Language: English 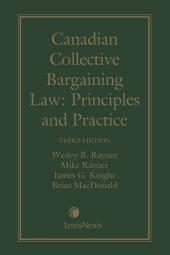 The law of collective bargaining is one of the most sophisticated and dynamic areas of law in Canada. Every practitioner should have a "go to" text on the framework in this area of the law and the process of collective bargaining, as well as practicalities to consider. The third edition of this highly regarded resource includes relevant updates to case law and statutes throughout; it also has been significantly expanded to include an entire new part of the text, which features 11 new chapters that examine the practical aspects of the collective bargaining process.

The Framework
The first part of the text guides the reader through the foundational topics of collective bargaining :

The Process – 11 New Chapters
The second part of the text guides the reader through the chronology of the collective bargaining process :

New In This Edition

Wesley B. Rayner, LL.B., LL.M., of the Ontario Bar, was formerly a law professor and Dean of the Faculty of Law at the University of Western Ontario. He has been an active labour arbitrator since 1970. He has also been a member of the National Academy of Arbitrators and the Ontario Arbitration Association, and served as its president in 1980. In addition, Professor Rayner has served as Chairman of the Board for the Ontario Motor Vehicle Arbitration Plan. Professor Rayner is also a noted writer in the field, including as co-author of Collective Bargaining Law in Canada, 2nd ed. (Butterworths, 1986).

View all books by Wesley B. Rayner (1)

Mike Rayner, B.A. (H), LL.B., O.W.S.I., was called to the Ontario Bar in 1997. He has worked in private practice in Toronto, London and in the public service for sixteen years at the Department of Justice with the Canadian federal government. Since then, he has practiced as a mediator and arbitrator in labour relations in Southwestern Ontario, where he was born and raised.

View all books by Mike Rayner (1)

James G. Knight, LL.B., is a senior partner working out of both the Hamilton and Toronto offices of Filion Wakely Thorup Angeletti LLP. He has 35 years of experience representing management in labour and employment law. Jamie regularly appears before the courts, arbitration boards and federal and provincial labour relations tribunals, as well as before adjudicators in human rights, employment standards and health and safety matters. He has extensive experience in collective bargaining and in guiding employers through the process of responding to union organizing campaigns. Jamie is a Fellow of the American College of Labor and Employment Lawyers. Jamie was named by Best Lawyers as the 2019 Lawyer of the Year for his work in Labour and Employment Law in Hamilton. In 2017, he was also named the Canadian HR Reporter 2017 Employment Lawyer of the Year, as selected by Canadian Lawyer Magazine.

Jamie has authored or co-authored over 20 publications for human resources professionals and lawyers, most of them in multiple editions. Jamie taught management and human resources employees in employment law programs at the University of Guelph for 20 years, with a focus on workplace safety and the legislative requirements for managing human resources. He has been a member of the Board of Directors of the Canadian Association of Counsel to Employers (CACE) since 2008. He is a past President (2016-17) and former Chair of the Human Rights Committee (2010-15), and was Co-Chair of the 2011 CACE Conference. Jamie also co-chaired the annual LSUC Conference, “6-Minute Labour Lawyer” from 2008 to 2014. Jamie has travelled widely, including to sub-Saharan Africa, where Jamie and his wife have been involved with Canadian charities working in local partnerships to improve education, child care and micro-finance opportunities for women and disabled persons.

Brian P. MacDonald has been a partner at Filion Wakely Thorup Angeletti LLP since 2016. He articled with the firm in 2009 before joining as an associate in 2010. He practices in all areas of labour and employment law and acts for a wide variety of union and non-union clients, including federally-regulated clients. Brian has acted as counsel in many significant arbitrations, wrongful dismissals and proceedings before the Ontario Labour Relations Board and the Human Rights Tribunal. He has also advised on and coordinated litigation strategy with employer associations and their members, both during the open season/raiding period and during the subsequent litigation. He regularly advises on WSIB issues as well as occupational health and safety matters. Brian has significant experience in collective bargaining. He has appeared as lead spokesperson for both federally and provincially regulated companies in both the public and private sector and in several industries, including manufacturing, trucking, construction, professional services and social welfare. He provides advice on drafting collective agreement language, and is a co-author of a major text on the subject. He also assists employers through the conciliation, strike and injunction process, where necessary. Brian believes in providing clients with practical, efficient solutions to manage complex workplace situations. Brian is a father of three, an avid reader of history, a collector of vinyl and a fan of the Blue Jays and Raptors.