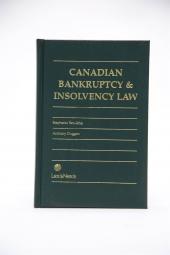 How Will Reforms Change the Law?

Canadian bankruptcy law faces a unique situation. Statute c.47 was enacted in late 2005 but has not yet come into force. The "2007 Amending Bill" now calls for substantial amendments to the Bankruptcy and Insolvency Act, the Companies' Creditors Arrangement Act, and Statute c.47.

What exactly do these proposed reforms mean? What influence can parliamentarians, practitioners, and academics exert during this "window period" to change Canadian bankruptcy and insolvency legislation?

Canadian Bankruptcy and Insolvency Law: Bill C-55, Statute c.47 and Beyondtackles these issues from a wide range of perspectives. Respected professors Stephanie Ben-Ishai and Anthony Duggan analyze the proposed reforms and related political concerns, together with:

Each of the book's 15 chapters addresses a critical aspect of Canadian bankruptcy and reorganization law. Questions will spark debate on how current law and policy compare with developments in other countries, and whether existing proposals for reform actually meet Canada's economic needs.

An Insightful Collection For:

Stephanie Ben-Ishai is an Associate Professor at Osgoode Hall Law School. She has published widely and given numerous Canadian and international conference presentations on all aspects of business and personal bankruptcy, corporate governance, and commercial law. Before entering academia, Professor Ben-Ishai practised with the Insolvency and Restructuring Group at Osler, Hoskin and Harcourt LLP. She is past winner of the American Bankruptcy Institute Medal of Excellence for her graduate work at Harvard Law School.

View all books by Stephanie Ben-Ishai (2)

Anthony Duggan, B.A., LL.B., LL.M., LL.D.,  is Professor Emeritus in the Faculty of Law at the University of Toronto. He held the Hon. Frank H. Iacobucci Chair in the Faculty from 2000 to 2020, and prior to that, he held the Henry Bournes Higgins Chair in the Faculty of Law at Monash University in Melbourne, Australia. Professor Duggan has published widely on a range of commercial law topics with a particular focus over the last decade on personal property security law in both Canada and Australia.

View all books by Anthony Duggan (3)