This treatise provides a comprehensive treatment of agency law in Canada, dealing with the, nature, formation, and termination of agency.
by The late Professor G.H.L Fridman (Author)
Publisher: LexisNexis Canada
Publication Language: English 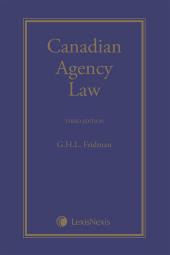 The ultimate authority on the law of agency in Canada
This treatise provides a comprehensive treatment of agency law in Canada, dealing with the nature, formation, and termination of agency. The author Gerald Fridman, well-renowned for his expertise in this area of law, pinpoints the most important topic areas and isolates the most relevant jurisprudence in the law of agency.

How the book will assist you

The late Professor Emeritus Gerald Fridman, Q.C., F.R.S.C., M.A., B.C.L., LL.M., Hon. D.C.L., was one of Canada’s most respected and influential legal scholars, and a prolific author of more than a dozen legal texts and more than 100 articles, major papers, case notes and book reviews. He was renowned in the fields of contracts, agency, torts, sale of goods and restitution. His work has been cited in more than 50 decisions of the Supreme Court of Canada and in hundreds of lower-court decisions. Professor Fridman studied law at St. John’s College in Oxford, and he held a B.A., B.C.L. and M.A. from the University of Oxford and a Master of Laws from the University of Adelaide in South Australia. In recognition of his extraordinary legal career, he was conferred an honorary Doctor of Civil Law from Western University. Professor Fridman was admitted as a barrister-at-law in the Middle Temple in London, England and as a barrister and solicitor of the Supreme Court of South Australia, and was called to the bars of Alberta and Ontario. He was a Fellow of the Royal Society of Canada, a tenured professor at Western University Law School, an Ontario Queen’s Counsel and Counsel at the law firm Cohen Highley LLP in London, Ontario. Professor Fridman was awarded the Walter Owen Book Prize for distinguished writing on Canadian law upon the publication of the first edition of The Law of Torts in Canada and the David W. Mundell Medal.

In addition to his passion for the law, Professor Fridman was a lover of music, theatre and travel, and had visited more than 100 countries.

View all books by The late Professor G.H.L Fridman (3)