A landmark constitutional law and history text as evidenced by the words of the Chief Justice of Canada and the Former Governor General in the forewords to the text which celebrates the 150th anniversary of Canada's Confederation through a range of perspectives from Canada's leading legal minds on constitutional law.
by Errol Mendes (Author)
Publisher: LexisNexis Canada
Publication Language: English 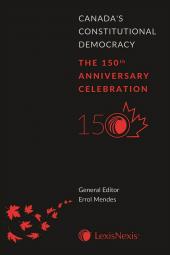 A landmark constitutional law and history text, as evidenced by the words of the Chief Justice of the Supreme Court of Canada and the Governor General of Canada, in the forewords to the text, which celebrates the 150th anniversary of Canada's Confederation through a range of perspectives from Canada's leading legal minds on constitutional law.

Add this to your library

Errol P. Mendes, LL.B., LL.M., is a full professor at the Faculty of Law, University of Ottawa. He has had a unique career as a leading and high profile university professor and scholar in his areas of expertise, as an adviser to governments, civil society, corporations and the United Nations, as a human rights practitioner and as a teacher of thousands of students in law faculties in Alberta, Ontario and Quebec since 1979.

He was the founding editor-in-chief of the National Journal of Constitutional Law and the co-editor of three of the editions of the landmark bilingual text, Canadian Charter of Rights and Freedoms. Mr. Mendes has served as a senior adviser in the Privy Council Office of the Government of Canada, as commissioner on the Ontario Human Rights Commission, as a tribunal member of the Canadian Human Rights Tribunal, as director of the Human Rights Research and Education Centre at the University of Ottawa and as a visiting professional at the International Criminal Court.

His long service in the field of human rights was recognized by the Walter Tarnopolsky Award for Human Rights by the International Commission of Jurists, Canadian Section. Mr. Mendes was recently awarded a Visiting Position at Harvard Law School.

In recognition for his work on human rights nationally and internationally, he was invested into the Order of Ontario on January 20, 2016. On May 25, 2016, in recognition for his decades long work as a legal academic and editor of leading legal publications along with his work as a human rights adjudicator and advocate, he was awarded one of the highest honors of the Law Society of Upper Canada, the Law Society Medal.

View all books by Errol Mendes (4)