This text identifies the relevant case law and underlying legislation used to draft the Cannabis Act, helping readers analyze the rules and limits of the Act and the Regulations. 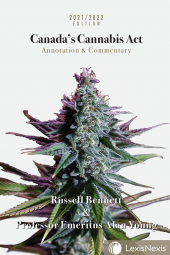 A Useful Resource
The 2021/2022 edition of the Cannabis Act: Commentary & Annotation will be of interest to:

In 2013, Bennett returned to practice, practicing insolvency law and fraud recovery law. In 2018, Bennett created his own full-service law firm, Cannabis Law, Barristers & Solicitors, to give entrepreneurs and small businesses the tools to protect themselves and thrive in the cannabis industry. Services include federal and retail licensing applications, defence of regulatory offences, employee issues, intellectual property, land use planning, asset protection and partner/shareholder issues. Cannabis Law also challenges questionable cannabis laws under the Constitution of Canada.