Canada at 150: Building a Free and Democratic Society 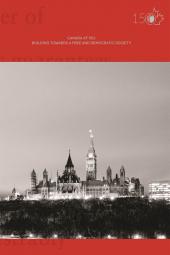 It's the 150th anniversary of Canada's Confederation and we're marking this historic event with the release of a one-of-a-kind publication, Canada at 150: Building a Free and Democratic Society. This pictorial celebration commemorates 150 years of Canada's legal and constitutional democracy as well as the 35th anniversary of the Constitution Act, 1982 and the Canadian Charter of Rights and Freedoms.

Featuring a collection of more than 50 curated essays on major political and historical developments in Canadian constitutional history written by key commentators and figures combined with lavish images of iconographic Canadian historical and contemporary individuals and landmarks, this book offers an insightful, balanced look at Canada's constitutional past and present, highlighting our achievements while acknowledging persistent injustices.

Compelling content with stunning visuals
Canada at 150: Building a Free and Democratic Society provides a unique review of Canadian legal and political history told through personal reflections from a wide variety of influential Canadians and illustrated with visual representations of the country's history and values.

Structured around Canada's key constitutional principles – the rule of law, federalism, democracy, respect for minorities, and the honour of the Crown in dealing with Indigenous people – this commemorative keepsake features:

A keepsake worth sharing
This beautiful volume will be an excellent addition to the bookshelves, reception coffee tables and libraries of law firms, individual lawyers and judges, constitutional experts and public libraries. It will also be the perfect gift or keepsake to mark this historic occasion.

CHAPTER 1: INTRODUCTION TO CANADA AT 150: BUILDING A FREE AND DEMOCRATIC SOCIETY

CHAPTER 3: THE RULE OF LAW

CHAPTER 7: INDIGENOUS CANADIANS AND THE HONOUR OF THE CROWN

Heather MacIvor, B.A. (Hons.), M.A., M.Sc., Ph.D., J.D., is a Content Development Associate at LexisNexis Canada. She was a political scientist for several years before attending law school. Heather co-edited Canada at 150: Building a Free and Democratic Society (LexisNexis, 2017) and co-authored Commissions of Inquiry (LexisNexis, 2019), and has worked on more than a dozen titles for Halsbury’s Laws of Canada.

View all books by Heather MacIvor (5)

Arthur Milnes, B.A., B.A.A., an award-winning journalist and public historian, has edited or co-edited 10 previous books about the lives and legacies of Canada's prime ministers and America's presidents – including a collection of Sir John A. Macdonald's speeches that was a Canadian best-seller. Originally from Scarborough, and educated at Queen's and Ryerson Universities, he lives in Kingston, Ontario. Art served as a speechwriter to former Prime Minister Stephen J. Harper and was the research assistant on former Prime Minister Brian Mulroney's best-selling 2007 book, Memoirs: 1939-1993.

View all books by Arthur Milnes (1)