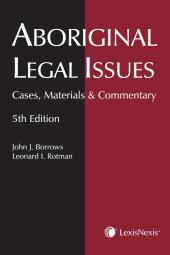 Includes seminal Williams Lake case handed down by the Supreme Court of Canada in early 2018.

This comprehensive casebook surveys the most important issues in Canadian law concerning Aboriginal peoples, contextualising them within their larger cultural, political and sociological framework.

Also intended to be a general reference work for lawyers, judges, Indian chiefs and council members, Metis and Inuit leaders, and policy makers for governments and businesses who work with Aboriginal people, it surveys the most important issues in Canadian law concerning Aboriginal people.

The materials also contain insights into questions courts have left unanswered, providing readers with ideas about how the law will develop in the future.

New in this edition

View all books by Leonard I. Rotman (2)