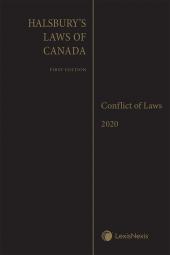 The realities of a global marketplace and shrinking political borders mean that the application and reach of law are seldom confined to a province, a country or even a continent. The field of conflict of laws, also known as private international law, concerns the mechanisms for addressing cross-jurisdictional legal conflicts in regard to three major areas:

Newly and thoroughly revised, Halsbury's Conflict of Laws (2020 Reissue) analyzes and explains the broad range of conflict questions and rules impacting Canada's 14 jurisdictions, including issues such as:

Janet Walker, C.D., B.A. (Hons.), M.A., J.D.., D.Phil. (Oxon), is a distinguished research professor and past Associate Dean of Osgoode Hall Law School, where she teaches Conflict of Laws and International Commercial Arbitration. She is the author of Canadian Conflict of Laws, 6th Edition, co-author of Civil Litigation, and general editor of The Civil Litigation Process, 8th Edition, Class Actions in Canada, 2nd Edition and Common Law, Civil Law and the Future of Categories.

Professor Walker is an executive editor of the Canadian Journal of Commercial Law, a member of the Scientific Advisory Board of the Max Planck Institute for International, European and Regulatory Procedural Law, Luxembourg, an honorary secretary general of the International Association of Procedural Law, an executive board member of the Chartered Institute of Arbitrators (CIArb) Canada Branch, the chair of the Arbitration Committee of ICC Canada, and a member of the ICC Commission on Arbitration and ADR. She has taught as a visiting professor at Monash, Haifa, U of T, NYU, NUS, Oxford, and for 13 years at Tunis II.

Professor Walker is a member of the Bar of Ontario, a chartered arbitrator of the CIArb, and a licensed legal consultant of the New York State Bar. She has served as the advisor (common law) to Canada’s Federal Courts Rules Committee, the academic advisor to the CIArb, and on numerous law reform initiatives. These include as an international advisor to the American Law Institute in its project with UNIDROIT to develop Transnational Principles and Rules of Civil Procedure, and as a member of the Uniform Law Conference of Canada Committee on National Class Actions, the IBA Task Force on International Procedures and Protocols for Collective Redress, the American Bar Association Litigation Section Working Group on Protocols for Parallel Class Actions, and Toronto Commercial Arbitration Society Arbitration Act Reform Committee in Ontario.

Professor Walker has served on many occasions as a consultant and expert in cross-border disputes, and as an international arbitrator under a variety of institutional rules in many jurisdictions, and she is a recipient of the CIArb Canada Award for Distinguished Service to Arbitration. MWO Walker (retd) holds the Canadian Forces decoration for more than 40 years of service in the Canadian Forces Reserve, the Governor General’s Horse Guards Commanding Officer and Regimental Sergeant Major’s Award of Excellence, the Land Force Central Area Commander’s Award of Excellence, and the Queen’s Golden and Diamond Jubilee Medals.

View all books by Janet Walker (3)