Carter’s Breach of Contract is an authoritative guide and provides comprehensive coverage of breach of contract and its consequences.
by John Carter (Author)
Publisher: LexisNexis Australia
Publication Language: English 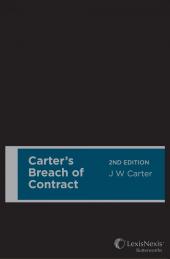 Carter’s Breach of Contract provides comprehensive guidance on the proof and consequences of breach, through detailed discussion and analysis of primary sources from the United Kingdom, Australia, New Zealand, Singapore and other common law jurisdictions. It is the leading text in the Commonwealth on the law of breach of contract, being regularly cited by the courts. The second edition is extensively revised and updated, including discussion of the impact of the following recent decisions:

Statutory developments taken into account include the Consumer Rights Act 2015 (UK), the Insurance Act 2015 (UK) and the Contract and Commercial Law Act 2017 (NZ).

John Carter is Emeritus Professor, University of Sydney and a Consultant at Herbert Smith Freehills. He is also General Editor of the Journal of Contract Law and a Fellow of the Australian Academy of Law

View all books by John Carter (1)