The Law of ADR in Canada - An Introductory Guide, 2nd Edition

The Law of ADR in Canada – An Introductory Guide, 2nd Edition explains all dispute resolution mechanisms available across Canada - including many not typically covered in other Canadian ADR texts. No matter where a dispute arises, you will be prepared for all options at hand in your jurisdiction.
by Duncan W. Glaholt (Author) , Markus Rotterdam (Author)
Publisher: LexisNexis Canada
Publication Language: English 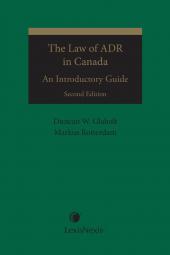 Litigation is no longer the default mechanism for resolving a commercial or civil dispute. Today, the key issue for parties in dispute is choosing a process that is both fair and affordable.

The Second edition takes into account changes in the law since the previous edition. It explains all dispute resolution mechanisms available across Canada - including many not typically covered in other Canadian ADR texts. No matter where a dispute arises, you will be prepared for all options at hand in your jurisdiction.

Discover when and how to use:

The law has progressed dramatically in some areas. The Supreme Court of Canada provided significant guidance on the issue of confidentiality in the mediation process, for example. In the field of domestic and international commercial arbitration, numerous appellate level decisions have clarified the law on standard of review, enforcement of awards, enforceability of pre-arbitral steps and stay of proceedings, among other important matters. Construction adjudication, a dispute resolution process established throughout the Commonwealth, but new to Canada, has now been introduced by Ontario's new Construction Act.

You will also learn:

PLUS Appendices An Introduction to ADR for:

View all books by Markus Rotterdam (4)