Law of the Constitution: The Distribution of Powers

This book offers an insightful and thorough look at the distribution of powers in Canada between the federal and provincial governments, and provides an analysis of how the courts have treated and decided the issues that have arisen in this context.
by Donald Bur (Author)
Publisher: LexisNexis Canada
Publication Language: English 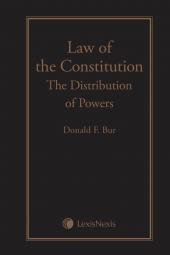 In Canada, sections 91 and 92 of the Constitution Act, 1867 set out the distribution of powers between the federal and provincial governments, and the Act also administers to the specific needs stemming from Quebec's linguistic differences as compared to English Canada.

Written by veteran lawyer and constitutional law expert, Donald Bur, Law of the Constitution: The Distribution of Powers offers an insightful and thorough look at the distribution of powers in Canada between the federal and provincial governments, and provides an analysis of how the courts have treated and decided the issues that have arisen in this context.

An invaluable resource
In Law of the Constitution: The Distribution of Powers, Dr. Bur conducts a comprehensive examination of the case law related to every class within section 91 and 92. His analysis of class descriptions allows readers to understand how the courts have interpreted federal and provincial legislative jurisdiction. His analysis of the content of each class, through the discussion of legislative matters, allows readers to access most of the constitutional cases that have been decided, from all levels of court, and places them within a particular class context. This approach enables readers not only to gain a broader understanding of what the courts have done, and what they should have done, but at the same time to conduct in-depth research in the area of constitutional law. This book also includes an in-depth discussion of the structure of the courts as well as the methodology of judicial interpretation.

This is a must-have resource for constitutional lawyers and government lawyers at all levels (federal, provincial and municipal), but also for any practitioner who deals with legislation and has a question about its validity. This book should be featured on the shelves of law libraries across the country.

Donald Bur, LL.B., Dip., LL.M., B.C.L., Ph.D., has close to 40 years' legal experience, most recently with the Ontario Ministry of the Attorney General, where he worked from 1991 until 2013. Dr. Bur earned his LL.B. from the University of Alberta (1977), his LL.M. from the University of Toronto (1981), a Diplôme from the Institut International des Droits de l'Homme (1987), his B.C.L. from McGill University (1990) and his Ph.D. from the University of Cambridge as a Commonwealth Scholar. His studies for three of these degrees have focused specifically on public law issues, and in particular, issues of federalism. Dr. Bur taught Public Law in the Ontario Bar Admission Course for a number of years and practised at the Constitutional Law Branch of the Ontario Ministry of the Attorney General. He has written extensively in the area of constitutional law and was the editor of Canadian Constitutional Law: Cases, Notes and Materials (3rd edition), published by Butterworths (now LexisNexis Canada).

View all books by Donald Bur (1)