Law, Liberty and the Canadian Constitution: A Freedom-Centred View

This is a collection of eight papers developed out of the Canadian Constitution Foundation (CCF)'s Annual Conference 2015. The papers take a critical review of recent legal developments regarding a number of controversial issues of national concern.
by Marni Soupcoff (Author)
Publisher: LexisNexis Canada
Publication Language: English 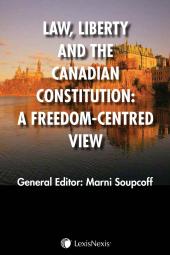 This is a collection of papers developed out of the Canadian Constitution Foundation (CCF)'s Annual Conference 2015. The papers take a critical review of recent legal developments regarding a number of controversial issues of national concern such as assisted suicide, mandatory minimum sentences, Senate reform and the proportionality-based approach that underlies the analysis of Charter-rights limitations.

The Collection of Papers

This paper challenges the commonplace assumption that the Supreme Court of Canada is the exclusive and authoritative interpreter of the Canadian Constitution, and examines scenarios where Parliamentary interventions may be justified.

The Theory of Law "As Claim" and the Inquiry into the Sources of Law: Bruno Leoni in Prospect
Daniele Bertolini

This paper presents a systematic analysis of the theory of law "as claim" through a critical review of Bruno Leoni's work.

The Canadian approach to analyzing Charter-rights limitations – the Oakes test and its proportionality-based approach – is subject to a number of myths. This paper seeks to expose and challenge these myths and to show the highly problematic character of Canadian proportionality analysis.

This paper challenges the intended purposes of civil forfeiture laws in Canada and contends that those laws most often function as a supplement or alternative to criminal law, thus resulting in a mesh between the two.

This paper critiques the outcome of the B.C. Supreme Court's unprecedented ruling in Leroux v. Canada Revenue Agency in which Canada Revenue Agency was found to have violated its duty of care by acting negligently to a taxpayer, while the taxpayer's interim motion for Charter relief was struck down.

This paper argues that legalizing assisted suicide fundamentally undermines life and liberty because permitting some people to kill members of a particular class, even with their consent, undermines more fundamental rights, e.g., the right to life of other members of that class.

No Statecraft, Questionable Jurisprudence: How the Supreme Court Tried to Kill Senate Reform
Ted Morton
This paper examines the political ramifications of the Supreme Court of Canada's declaration in Senate Reform Reference (2014) that the Harper Government's proposed statutory reforms to the Canadian Senate were unconstitutional.

Who should read this book

Marni Soupcoff, J.D., is the Executive Director of the Canadian Constitution Foundation. She graduated Phi Beta Kappa from the Johns Hopkins University in 1997 and received her law degree from Stanford University in 2000. Before moving back to her home town of Toronto, Marni worked as a lawyer with the Institute for Justice in Washington, D.C., where she litigated economic liberty and property rights cases. Her writing appears weekly in the National Post.

View all books by Marni Soupcoff (1)