This text is the only one of its kind that undertakes a thorough overview of the law of contractual interpretation from both the Canadian common law and Quebec civil law perspective.
by Geoff R. Hall (Author)
Publisher: LexisNexis Canada
Publication Language: English 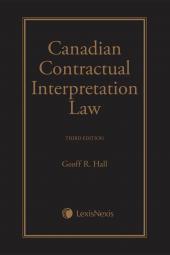 Cited by courts across Canada including the Supreme Court of Canada
The author, Geoff Hall, a senior commercial litigator and adjunct law professor teaching contractual interpretation law, clearly explains the legal principles that underpin virtually every aspect of the interpretation of contracts, analyses past, present and future developments with reference to ample Canadian case authorities, and provides insight into how this dynamic area of the law may develop in the future, particularly with reference to the new issues opened up by Sattva and Bhasin.

Who Will Need this Book?

Geoff R. Hall, B.A., M.A., LL.B., LL.M. is a partner in the litigation group at McCarthy Tétrault LLP, in Toronto. He is also an Adjunct Professor at the University of Toronto Faculty of Law, where he teaches a course entitled "Advanced Contracts: The Law of Contractual Interpretation". He has previously been a Sessional Lecturer at Queen's University Faculty of Law (trial advocacy) and an Adjunct Professor at Osgoode Hall Law School (advanced contracts). Mr. Hall's litigation practice focuses on corporate and commercial litigation, and he also has extensive experience in administrative law and bankruptcy/restructuring litigation. He has appeared as counsel at all levels of court in several provinces, and in both domestic and international arbitrations.

Mr. Hall has published over a dozen full-length journal articles on contract law and other topics as well as numerous other legal commentaries; he has spoken at numerous conferences on contract law and other topics (including a presentation to the National Judicial Institute and several presentations at the Annual Workshop on Commercial and Consumer Law); and he regularly teaches at trial advocacy programs. He is a member of the Board of Trustees of the Canadian Business Law Journal. 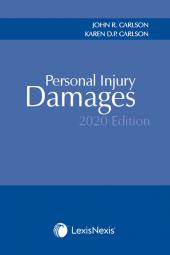 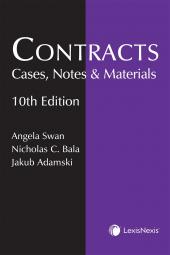