Written in a detailed and clear manner, this book is comprehensive, informative and yet very readable. The second edition adds a completely new chapter on domestic corruption, international anti-corruption laws, and how to conduct an investigation. 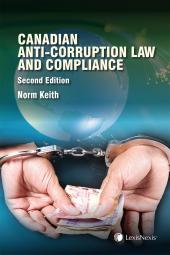 Corruption and bribery of public officials is a fact of life and also almost a way of life in many countries around the world and in Canada. Canadian businesses and professionals are not free from the threat of domestic or foreign corruption in the many touch points where they are required to deal with public, government officials. From local building inspectors to foreign government licensing officials, corruption rears its ugly head everywhere businesses deal with public officials.

The problem of corruption is not pervasive but also pernicious. "A recent survey performed by a global business consulting firm discovered that only 50 per cent of senior corporate executives are ‘"highly confident'" that business control systems are managing their organizations' business risks effectively." *
* William P. Olsen, The Anti-Corruption Handbook: How to Protect Your Business In the Global Marketplace

Written in a detailed and clear manner, this book is comprehensive, informative and yet very readable. The second edition of Canadian Anti-Corruption Law and Compliance adds a completely new chapter on domestic corruption, international anti-corruption laws, and how to conduct an investigation. The chapter on compliance programs has also been significantly enhanced.

The substantive law content has been expanded by completely new coverage of the Criminal Code provisions dealing with the bribery, influence peddling and corruption of domestic public and government officials. The focus on relevant sections of the Corruption of Foreign Public Officials Act (CFPOA) have also been extended to the Criminal Code. The practice "how to" section will be very helpful for In House Counsel, Chief Compliance Officers and their staff, and external compliance consultants and counsel.

Norman A. Keith, B.A. (Econ.), J.D., LL.M., CRSP, is an employment, regulatory, and white-collar defense lawyer with KPMG Law LLP, based in Toronto, Canada. He has successfully defended over 1,000 regulatory and criminal charges. He has represented corporate defendants, directors, officers and senior managers at all levels of courts up to the Supreme Court of Canada. Mr. Keith has assisted clients in a wide range of industries, including energy, construction, infrastructure, manufacturing, real estate development, health care, nuclear, transportation, aviation, mining and mining plants, and retail sectors. He was appellate counsel to Nazir Karigar, the first individual charged under the Corruption of Foreign Public Officials Act.

He is a frequent speaker at national and international conferences. He is the author of 12 books and hundreds of trade and peer reviewed journal articles. Lexpert has rated Mr. Keith as the most frequently referred lawyer in Ontario for Occupational Health and Safety law matters. He is also recognized in The Best Lawyers in Canada as a leader in his fields. Mr. Keith was called to the Ontario Bar in 1983 and was the first practicing lawyer in Canada to earn a Canadian Registered Safety Professional accreditation in 1998. He is an International Bar Association committee member for White Collar and Business Crime, an American Bar Association White Collar Crime committee member representing Canada, and a member of the Canadian Bar Association Anti-Corruption committee.