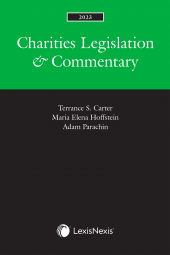 In Canada, there is no single statute that sets out all of the legislative requirements applicable to charities. Rather, the relevant statutory provisions are found in multiple federal and provincial statutes. In addition, extensive legislative changes each year make it increasingly difficult to cope with the law. Having a concise guide to the law governing charities is a must.

Highlights of This New Edition

Terrance S. Carter, B.A., LL.B., TEP, Trademark Agent, is Managing Partner of Carters Professional Corporation and practises in the area of charity and not-for-profit law, and is counsel to Fasken. Mr. Carter has been recognized as a leading expert in Canada by Lexpert, Best Lawyers in Canada and Chambers and Partners. Mr. Carter is co-author of Corporate and Practice Manual for Charities and Not-for-Profit Corporations, contributing author of The Management of Charitable and Not-for-Profit Organizations in Canada and co-author of Branding & Copyright for Charities and Non-Profit Organizations. He is also the editor of various publications on charitylaw.ca, carters.ca and churchlaw.ca. Mr. Carter is a former member of the CRA Advisory Committee on the Charitable Sector.

Maria Elena Hoffstein, B.A., M.A., LL.B., is a lawyer in the Toronto office of Miller Thomson LLP and is a member of the Private Client and Social Impact Groups. Ms. Hoffstein practises in the area of charity and not-for-profit law, estate planning and family business succession planning, and contentious and non-contentious estate and trust matters. Ms. Hoffstein is co-author of the book Charitable Giving in Canada and author of the chapter on Trusts in Halsbury's Laws of Canada. Ms. Hoffstein has been ranked by Chambers Canada in Charities/Non-Profits, by The Canadian Legal Lexpert® Directory in Charities/Non-Profit Law and Estate & Personal Tax Planning, and by Best Lawyers in Canada in Charities/Non-Profit Law, Tax Law and Trusts and Estates. In 2006, she received the Ontario Bar Association Award of Excellence in Trusts and Estates in recognition of her leadership and contribution to estates and trusts law.

View all books by Adam Parachin (1)